Believe us - there's no shortage of wonderful sights to be seen and fantastic things to do .....just read on...

Canoes at Brantome (click to enlarge)
CANOEING
The River Dronne lazily meanders through the unspoilt landscape of the South Charente, offering endless possibilities for canoe hire, (with life jackets!)  You can rent one for an hour, or better still, have the canoe owners drive you to a drop-off point and you then take as long as you like to paddle, downstream, back to base. Canoes can be hired at Brantôme, Bourdeilles, Ribérac and Aubeterre - they're bright yellow or green, so you can't miss them! For more details, click here - a new window will open.

Chateau at Mareuil - (click to enlarge)
CASTLES
This region of France abounds with medieval history and, of course, castles, with many being open to the public - we've one here in Villebois-Lavalette, and our Tourist Office gives guided tours, (in both English and French), of the Villebois Heritage Trail, through the town and around the chateau.  There are castles in nearby Magnac-Lavalette, Mareuil (see the image to the left), Bourdeilles, Aubeterre, Chapdeuil, La Tour Blanche, and Vendoire - and as you head south towards the Dordogne, they're all over the place!

Shrimping Huts at Meschers
THE COAST
The Atlantic is about 90 minutes from here, but if you're a big sea lover then miles of white sand, rocks, and rock pools, sea ports, shrimping huts, (see left), and restaurants selling oysters and mussels all await you.  Meschers, St George Didonne and Royan are all there for the taking.  A bit further north is the very splendid La Rochelle and a lot further south, (of Bordeaux), is our favourite place, Cap Feret on the Arcachon Basin.

Cyclists in Villebois-Lavalette
CYCLING
Now you don't have to be as earnest as these guys, (see left), but if you're a keen on cycling, we've hundreds of kilometers of open road and rolling countryside to be explored - and yes there are one or two hills that will test you!

Oak brandy barrels at the Hennessy Distillery
DISTILLERY TOURS
Just 6kms apart, the towns of Cognac and Jarnac are the centres of the brandy/cognac making in France.  Jarnac is the base for Courvoisier and Cognac is the home of Hennessy - and it's the Hennessy Distillery Tour that's probably the best of all of them.  We can help you book in advance and they conduct both English and French tours. 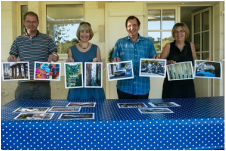 Photo Heroes!
PHOTOGRAPHY
If you or one of your party want to understand how to get more from a camera, then we'd be very happy to help out.  When La Maison du Couvent is not running as a holiday home, it morphs into Studio Lavalette - a highly successful residential photo-holiday business.  For more details have look here.

Street Market at Brantome - (click to enlarge)
MARKETS
If you want to see colour and local produce in abundance, you cannot miss the markets - they play a key part of French life.  There are big year-round Friday street markets in both Brantôme, and Ribérac.  And every Saturday morning, under Les Halles, (which is 5 seconds from our front door), in Villebois-Lavalatte, we have a small market that's always worth a visit - the oysters-with-white-wine stall always seems busy!

Fireworks at Villebois (click to enlarge)
FESTIVALS, FETES & FAIRS
Throughout the South West of France there seems to be an endless number of first class cultural festivals - we're spoiled rotten!  We have many "what's-on" leaflets and pamphlets in the Maison du Couvent, but here's a quick overview of some regular annual events:

January - At the end of January, Angoulême hosts the Cartoon Festival or Bande Desinee, (BD), which is attended by thousands of people, (from all over the world), who love cartooning.  The BD website is here.

April - On Palm Sunday, Villebois-Lavalette is the place to be, as we have the Fete des Rameaux. There's a huge car boot sale, pony rides for kids, food and drink stalls and they run a photo competition.

July - Yes Cognac is famous for brandy, but in early July, it holds a seven day and night festival called Blues Passions - heavens Robert Plant headlined the 2014 show and Iggy Pop was here in 2016!  The website is here.

July - Taking place in a variety of old churches throughout our region, and primarily during the last week of July, is the Itineaire Baroque.  Under the baton of the legendary master of the baroque period, Ton Koopman, this celebration of music is usually totally sold out before a note is played.  The website is here.

August - Around the middle of August the town of Confolens holds a large five-day Danse et Musique du Monde (Global Dance and Music Festival).  With shows happening all through the days and nights, there's buckets to see and enjoy.  The website is here.

August - During the last three days of August, Villebois-Lavalette has its own fete that culminates in a huge firework display (see image above) at the foot of the castle on the Sunday night - it's a spectacle not to be missed. The Villebois-Lavalette Office de Tourisme is here.

September - In the third week in September, Angoulême is filled with vintage cars of all ages, shapes and sizes when Le Circuit des Remparts takes place. This festival has been going for over 70 years and attracts motor-mad enthusiasts from everywhere.  Each year the cars and drivers take their vehicles out into the countryside and last year Villebois-Lavalette was one of their stopping-off points and hundreds of old cars descended on us.  The website is here.


RESTAURANTS
France is all about food and there is no shortage of restaurants to go to and experience real French cooking.  Right on our doorstep is Le Lavalette serving regional fare, and a little bit further down the road is a cheerful pizza shop called Hall' Dente.